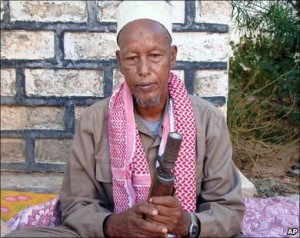 A leading figure in the Somali-based Al-Qaeda-affiliated Shabaab movement has died in Somalia, the Islamic militant group said Thursday.

In a death announcement and obituary carried by jihadist media, the Shabaab said Sheikh Hassan Abdulahi Turki, known as Hassan Turki, died on Wednesday evening in the Middle Juba region south of the capital Mogadishu. Turki was in his 70s and suffered from poor health.

“Sheikh Hassan Abdulahi Turki died last night in Hargeysa Yarey township. We pray to God to give him his mercy and accept his long-term good deeds,” Shabaab spokesman Ali Mohamud Rage said in an audio message.

Rage said Turki “was one of Somalia’s greatest scholars” who had met “Al-Qaeda leaders, led by Osama bin Laden, twice in Afghanistan and another time in Sudan” and had fought against US soldiers in Mogadishu in 1993, the year 18 US soldiers were killed in the so-called Black Hawk Down incident during an ill-fated intervention.

The Ethiopian-born former soldier was a veteran Islamist who played a series of leading roles in Somalia’s civil war.

Turki was a founding member of Al-Itihaad Al-Islami in the early 1990s alongside Hassan Dahir Aweys, often regarded as the godfather of Islamic militancy in Somalia. Together they also formed a successor group called Hizbul Islam.

Turki played a key role in the Islamic Courts Union, which briefly controlled Somalia in 2006, and helped establish the Shabaab which emerged in the wake of the US-backed Ethiopian invasion that ended its rule.

In 2004 the US put Turki on its list of global Al-Qaeda leaders after accusing him of involvement in the US embassy bombings in Kenya and Tanzania six years earlier. In 2008 he survived a US air strike targeting him and other militant leaders in southern Somalia.

In recent years Turki’s influence and importance waned as old age and ill-health took their toll.