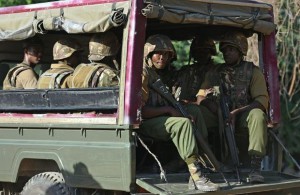 At least 14 people were killed and 11 wounded on Tuesday when gunmen attacked a northern Kenyan village, close to the border with war-torn Somalia, officials and Red Cross said.

There was no immediate claim of responsibility but Somali-led Shebab militants have carried out a string of attacks in the region, highlighting the insecurity that plagues parts of the country.

The attack occurred at an area called Soko Mbuzi, a livestock market just outside the town of Mandera in Kenya’s far northeastern region, bordering Somalia and Ethiopia.

“People were sleeping when the attack happened, they just came and hurled explosives in the houses,” said Mandera County Commissioner Alex Ole Nkoyo, confirming 14 people had been killed in the attack in the early hours of Tuesday morning.

“These were Al-Shebab from the nature of the attack. They used explosives and guns.”

Nkoyo said those attacked mainly worked in a nearby quarry.

Kenya Red Cross said it had taken 11 wounded to hospital, and had sent a medical airplane to evacuate the critically injured to the capital Nairobi.

Under pressure in Somalia where it has for years been fighting to overthrow the Western-backed government, the Al-Qaeda-linked Shebab is now increasingly targeting Kenya.

The Islamic militants have stepped up their attacks during Islam’s holy fasting month of Ramadan.

In the group’s deadliest attack to date, four gunmen killed 148 people, mostly students, at a university in the Kenyan town of Garissa in early April.

In 2013, four Shebab gunmen killed at least 67 people in an assault on the Westgate mall in the capital Nairobi.