You are here: Home / Senza categoria / ‘Sexual brutality’ of Daesh attracts Muslim men with history of violence against women 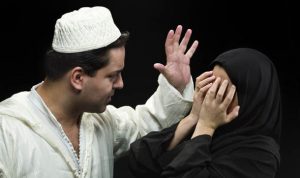 IT is one of the key questions of our time – what drives someone to join an extremist group?

According to analysis released by human rights think-tank the Henry Jackson Society, Muslim men with records of crimes against women are attracted to join Daesh because of its “sexual brutality”, like reported by thenational.scot.

The cross-border network is known for its brutal crimes against civilians and extensive persecution of women, especially Yazidis, a religious minority in Iraq whose followers the group permits its members to rape.

Tens of thousands of people were forced to flee their homes due to the violence, with men killed and women and girls taken into sexual slavery.

Daesh has repeatedly promoted and attempted to legitimise a theology of rape and has also set up a department dedicated to “war spoils” and issued guidelines to codify slavery.

Survivors have told how they were “won” by Daesh members, who were allocated women and girls by the drawing of lots.

Report author Nikita Malik says the use and promotion of such practices has been key to “attracting, retaining, mobilising and rewarding fighters” for the network and used to punish those who do not follow their extreme version of Islam.

Cases included Londoner Onogo Ahmed, who was jailed for eight years for raping a 16-year-old and left for Syria after being released from prison on licence.

One teenage survivor told how another Londoner, Siddhartha Dhar, enslaved some Yazidis and also took part in their trafficking and abuse.

Malik said: “These cases indicate an existence of a type of terrorism that is sexually motivated, in which individuals with prior records of sexual violence are attracted by the sexual brutality carried out by members of [Daesh].”

The study cites cases of victims as young as ten and says Daesh, Nigeria’s Boko Haram and similar groups are turning to hostage-taking and ransom as other income streams such as oil sales dry up.

As well as spreading terror, Daesh uses sex trafficking for financial gain, with the report suggesting ransoms paid for captive slaves made them between £7.6 million to £22.8m last year.

While Malik says more work must be done on the issue of prior sexual offences or domestic violence and terror involvement, evidence already exists to indicate a potential correlation.

In the UK, it has emerged that the former partner of London Bridge attacker Rachid Redouane entered a domestic violence unit after suffering abuse from the 30-year-old.

The ex-wife of Khalid Masood, who killed five and injured 50 at Westminster in March, also told reporters how she left the “violent, controlling psychopath” after three months of marriage.

Malik says the Modern Slavery Act and Terrorism Act should now be revised to reflect the use of sexual violence as a terror tactic.

She said: “The international community must recognise and address the nexus between this criminality and security. Historical revenue streams, including taxation and oil sales, to groups such as Islamic State and Boko Haram are decreasing.

“These are being replaced with hostage-taking and ransom efforts, meaning modern-day slavery may increase as Daesh struggles to sustain its financial reserves.”

Lord Carlile, the UK Government’s former independent reviewer of terrorism legislation, said the findings highlight the need for more international cooperation “to break up the trafficking gangs and routes, which are so essential for their wicked trade in human beings”.