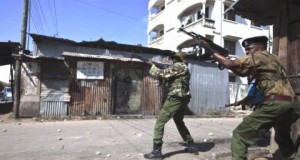 A police spokesman, George Kimoti, confirmed there was an attack in the Garissa region but declined to give more details.

“Please give us time to consolidate all the information,” he said.

The Daily Nation newspaper of Kenya reported that at least 20 police officers were feared dead, the victims of an ambush Monday night by al-Shabab militants in Yumbis village.

The police officers – who were on their way to rescue another team of officers wounded in an attack earlier on Monday – were moving in a convoy of four vehicles, according to the newspaper. The vehicles reportedly were burned.

The Islamic extremist group al-Shabab has carried out several attacks in Kenya in retaliation for Kenya’s military involvement in Somalia, where Kenyan troops are part of an African Union force bolstering the Western-backed central government.

Despite major setbacks in 2014, al-Shabab continues to wage a deadly insurgency against Somalia’s government and remains a threat in the East African region.

The group claimed responsibility for a deadly assault last month on a college in Garissa town.