You are here: Home / Mediterranean / Seven Syrian mercenaries drown trying to arrive in Italy from Libya 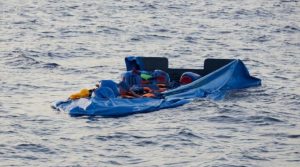 The Syrian Observatory for Human Rights stated that seven of the Syrian mercenaries who were transported by Turkey to fight in Libya, died drowning while trying to reach Europe, after they used Libya as an excuse for their crossing to Europe.

The observatory indicated that many pro-Turkish fighters are continuing their efforts to reach Europe, similar to the dozens who preceded them as they reached Italy and from there to Europe.

The observatory noted in a previous report that a group of 550 mercenaries had returned from Libya in late October after receiving information about arguments between them due to the fact that they did not receive their monthly dues from the leaders of some groups, bringing the number of those who returned so far to 9,850 fighters.