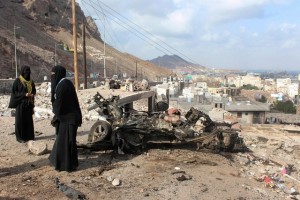 A suicide bomber driving a car packed with explosives has killed seven people and injured eight others in Aden’s Crater district.

ISIL claimed the bombing in a statement posted online.

The attack, which took place on Friday night, was the second ISIL-claimed suicide bombing to hit the southern Yemeni city in as many days.

The explosion struck the main checkpoint at the western entrance to Crater district, a source in the Aden security office told The National. The district is home to the presidential palace of Abdrabu Mansur Hadi, along with several government buildings and banks.

“Seven people have been killed and eight others injured in a car bombing that struck at 10pm (local time),” the source said.

The attacker exploded the car after stopping at the checkpoint for soldiers to inspect the car, which they suspected of carrying explosive devices, the source said.

The security office source said on Saturday morning that security had been stepped up across Aden province following Friday night’s attack.