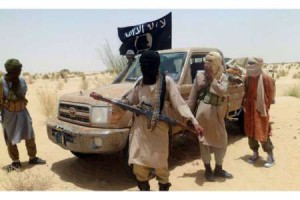 Three civilians died in Mali at Dounapen, a village in the Mopti region close to the Burkinabe border, where local officials said the assailants had descended by motorbike on the area brandishing black flags.

Earlier, three police officers and one attacker died in Samorogouan district not far from the border with Mali.

It was unclear whether the attacks, some 500 kilometres (310 miles) apart, were directly linked.

“Three civilians, including a mayoral assistant, were killed Friday,” in the Mopti attack, a Malian security source told AFP, adding an unspecified number of people were injured. A town hall official confirmed this account.

In the other attack across Burkina Faso’s western border, three police were killed in a raid on their barracks carried out by “about 50” assailants, the defence ministry said in the capital Ouagadougou.

A security source, speaking on condition of anonymity, said jihadists were responsible for the attack.

The police brigade in the district of Samorogouan, some 30 kilometres (19 miles) from the Malian border, came under pre-dawn attack, it said in a statement, adding that one assailant was killed.

A statement by chief of staff General Pingrenoma Zagre said the attacks came around 4:00 am (0400 GMT) “when about 50 armed… unidentified men from Burkina’s western borders attacked” the police facility.