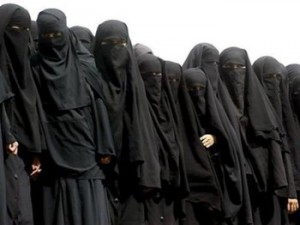 A Belgian court convicted seven women for supporting the so-called Islamic State (ISIS/ISIL) and enticing other young females to join the terrorist group.

The women included five Belgians, one Dutch, and one Moroccan. Only four of the accused sat in court when the judge read the conviction. Authorities believe the others are in Syria alongside ISIS. From Reuters:

In their absence, they were given five-year prison sentences for their activities with those battalions, including patrolling and guarding entrances to towns and cities in Syria.

The women present in court were guilty of facilitating the departure of Islamic State recruits and collecting money for organizations aiming to radicalize young girls. They received prison sentences of between 20 and 30 months.

Statistics show over “350 Belgians have gone to Syria to fight, the highest number per capita of any European country.” In May, a gunman attacked the Jewish Museum in Brussels, killing four.

Authorities arrested a Frenchman, who spent time in Syria with radical Islamists, a few days later. They pursued charges against the group Sharia4Belgium in the wake of the attack, which led to the arrest of 46 people including Nabil Kasmi, 23, who received training in Syria. His trial, along with 45 other members started in September 2014.

Authorities believe this group is a main reason why Belgium breeds many jihadists since “it created a logistical glide path for would-be jihadists who went from Belgium’s rolling countryside to the arid deserts of Syria.” The use of social media allowed those who did not travel connect with Muslims in Syria.

“They were using Facebook, using pictures of the villa they were living in,” described E.U. Counterterrorism Coordinator Gilles de Kerchove. “They tried to advertise it was the ultimate place with swimming pools and easy living.”

In January, the government launched counter-terror raids across the country. A source told CNN between 120 and 180 Muslims were part of the group targeted by law enforcement. At least two people died and a third arrested. Officials claimed the groups were going “to launch attacks in a matter of hours.” The government also sent out soldiers to protect “vulnerable sites” in the country.

The court convicted the group’s leader Fouad Belkacem to 12 years in prison. Only nine of the defendants appeared in court, but the judge claimed “there was insufficient evidence to prove the absent suspects’ deaths” and tried them as well. Judge Luc Potargent wrote that the group “wanted a ‘totalitarian’ Islamic state in which ‘there is no freedom, no human rights, no place for personal development, science or culture. Their state is based on violence and fear.”

“It is clear that Belkacem… prepared young people physically and psychologically for armed combat,” he continued.