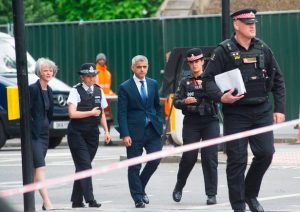 A total of seven terror attacks have been halted by police since the Westminster bridge atrocity in March, Sadiq Khan has revealed, according to getwestlondon.co.uk.

The capital has been hit by four attacks since March this year, but a further seven were thwarted according to the Mayor of London.

Mr Khan said counter-terror experts have told him there has been a shift in the threat, rather than a spike in attacks, this year.

Mr Khan told a Guardian live fringe event at Labour’s party conference in Brighton: “The phrase used by police experts, counter-terror experts, in relation to terrorism is what we’re seeing is not a spike but a shift.

“And the reason why they say that is because if you look at the time when Fusilier Lee Rigby was murdered in 2013 up until the Westminster Bridge attack this year, there were 13 terrorist attacks thwarted because of the excellent work of the police and security services.

A policeman was stabbed and his attacker shot by officers following a major incident at the Houses of Parliament on Wednesday March 22.

The attacker drove into several pedestrians as he drove a grey Hyundai i40 across Westminster Bridge before crashing it into railings then running through the gates of the Palace of Westminster and stabbing 48-year-old PC Keith Palmer .

Following the incident, 22 killed and 59 injured at Ariana Grande concert in suicide bomb blast in Manchester on May 22.

A total of seven people were killed and 48 injured after a terrorist attack in London Bridge on June 3, when a gang ploughed into pedestrians in a van.

The latest incident saw a bomb left on a tube at Parsons Green station, injuring 22 people on Friday September 15.

No one was killed as a result of the Parsons Green incident, but 30 people were injured.