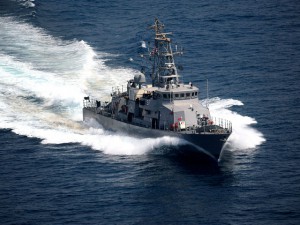 Seven fast-attack Iranian military vessels engaged in yet another provocative confrontation with the U.S vessel the USS Firebolt over the weekend, resulting in one Iranian boat coming to a halt in front of the U.S. coastal patrol ship.

This incident is the latest dangerous interaction between the two countries in the international waters of the Persian Gulf, CNN has learned.

An anonymous American defense official told CNN: “The provocative maneuver, which on Sunday brought the Iranian boat within 100 yards of the [USS] Firebolt, a coastal patrol boat that carries a crew of about 30, was assessed by the US to be unsafe and unprofessional and could have led to a collision.”

Last week, Fox News obtained new data from an official at the U.S. Department of Defense (DoD) on condition of anonymity, showing that there have already been 30 dangerous interactions with Iran so far this year, surpassing the 24 that occurred throughout of all last year.

In just the first half of 2016, there were 19 confrontation incidents, nearly doubling the 10 that took place during the first six months of 2015.

CNN, citing the anonymous defense official, reports similar figures, saying, there have been 31 unsafe America encounters with Iranian vessels in the Persian Gulf so far this year, more than during all of 2015.

The news network’s figure may include the recent confrontation.

U.S. Central Command (CENTCOM) chief Gen. Joseph Votel, who oversees U.S. military operations in the Middle East, suggested during a press conference recently that the Iran may reach a point of no return with its provocative actions, prompting an “international incident” that it may end up regretting.

In May, a commander of the IRGC Navy threatened to “drown” U.S. warships if they pose a threat to Iran.

The CENTCOM commander noted that the IRGC Navy has been behind nearly 90 percent of the “unsafe, unprofessional activities” against the U.S. military.

I think the big concern here is miscalculation, that I’m very confident in the measures that our maritime forces are taking. They are measured, they are deliberate in the things that they are doing, but ultimately we are going to protect ourselves if that comes to a situation.

So, I am concerned about… rogue [Iranian Revolutionary Guard Corps] force naval commanders who are operating in a provocative manner and are trying to test us. Because ultimately we will prevail here and I’m very, very confident of that and we certainly don’t want that to come to pass, and that’s why I call on them to act in a professional manner.

In January, IRGC vessels captured and humiliated 10 U.S. Navy sailors after their two ships drifted into Iranian waters. The American sailors were released the following day.

“If an American ship enters Iran’s maritime region, it will definitely get a warning. We will monitor them and, if they violate our waters, we will confront them,” warned Iranian Defense Minister Hossein Dehghan this week.

“We certainly hope it doesn’t continue, because it serves no purpose other than to raise tensions in an important part of the world; and tensions that we don’t seek to have escalated,” declared Pentagon Chief Spokesman Peter Cook last week.

Gen. Votel pointed out that the nuclear deal reached between Iran and five superpowers led by the Obama administration has done nothing to change Iran’s nefarious activities. Iran continues to be listed by the United States as a primary state-sponsor of terrorism.

Nevertheless, the Obama administration has begun to unfreeze billions of dollars as part of the nuclear pact and allegedly paid millions in ransom for American hostages, in violation of the United States’s long-standing stance against negotiating with terrorists.

Obama and some military leaders conceded that the Islamic Republic would likely use some of the unfrozen funds towards funding its narco-terror proxy Hezbollah, and other activities in the Western Hemisphere, particularly in Latin America.