You are here: Home / Europe / Seven injured in terror attack as lorry rams cars in Germany 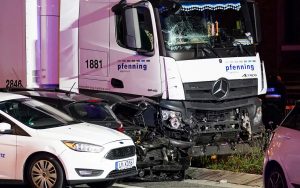 Seven people have been injured in a suspected terror attack after a man drove a stolen lorry into a line of cars in Germany, like reported by telegraph.co.uk.

A 32-year-old Syrian man is being held following the incident in the western town of Limburg, near Frankfurt, on Monday evening.

Police have so far refused to comment publicly on the possibility it was a terror attack, but investigations are now focusing on this possibility, according to German media reports.

One person is in a critical condition following the incident, in which a lorry ploughed into the back of a line of traffic, ramming eight cars together.

The incident was initially thought to be a traffic accident and onlookers rushed to help the driver of the lorry.

“I spoke to him,” Bettina Yeisley, a witness, told Frankfurter Neue Presse newspaperr. “He was bleeding from his nose, his hands were bloody, his pants were torn. He said: everything hurts. I asked what his name is. He told me Mohammed.”

Conflicting reports gave the suspect’s first name as Omar. Those who had rushed to help became suspicious after he shouted the word “Allah” and held the man until police arrived.

It later transpired he had stolen the lorry after forcing its driver from the cab while it was waiting at a red light.

The unnamed driver told of how the suspect tore open the door of the lorry and stared at him with wild eyes.

“What do you want from me?” the driver said he asked the man. “But he didn’t say a word. I asked him again, then he dragged me out of the truck.”

The incident was reminiscent of the 2016 attack in Berlin which 12 people were killed when a rejected Tunisian asylum seeker drove a stolen lorry into a crowded Christmas market.

The suspect in the Limburg attack was known to police and has a criminal record, but no history of extremism.

He has been living in Germany since November 2015, but his residence papers expired at the beginning of this month.