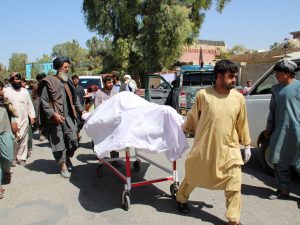 The group of migrant Hazara labourers had their hands bound behind their backs and were shot to death late Wednesday, according to Nangarhar provincial council member Ajmal Omar.

Juma Gul Hemat — Nangarhar’s provincial police chief — confirmed the murders, adding that four people had been arrested as part of an ongoing investigation.

The incident occurred roughly 20 kilometres from the eastern city of Jalalabad near the Pakistan border — an area where a large number of militants are believed to have influence, including the Taliban and the local affiliate of the Islamic State (IS) group.

No group has claimed responsibility for the murders.

Jalalabad has been hit hard by targeted killings in the last week with three female media workers gunned down in the city’s streets on Tuesday in separate attacks that occurred just minutes apart.

A female doctor was also killed by an explosion early Thursday after a magnetic bomb was attached to her vehicle.

For years, the Hazara have increasingly taken the brunt of rising violence across Afghanistan with IS suicide bombers attacking their mosques, schools, rallies and hospitals.

The Hazara make up roughly 10 to 20 percent of the Afghan population and have long been persecuted for their largely Shiite faith by Sunni hardliners in a country wracked by deep ethnic divisions.

The Taliban has also targeted the group over the years, kidnapping and killing Hazara commuters travelling on the country’s perilous roads with near impunity.

During the Taliban’s brief rule of the country in the 1990s, the jihadists were also accused of massacring large numbers of the group.

The Hazara have also been targeted outside of Afghanistan.

In January, a group of Hazara miners — most of whom were Afghan nationals — were brutally killed in another execution-styled massacre claimed by IS in Pakistan.