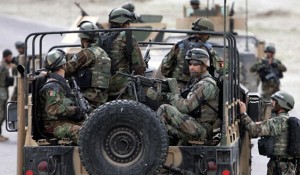 A senior Taliban leader has been killed along with several other militants in northeastern Takhar province of Afghanistan as the Afghan national security forces intensify operations to retake control of Darqad district.

The Ministry of Interior (MoI) said at least 17 Taliban militants have been killed so far as several parts of Darqad has been cleared since the opertion was launched on Friday.

MoI further added that the Taliban group’s shadow district governor for Khwajah Bahauddin was also among those killed during the operations.

The Afghan national security forces have not suffered any casualties as the clearing the operations are successfully behing conducted, MoI added.

Takhar is among the relatively volatile provinces in northeastern Afghanistan where anti-government armed militants are actively operating in a number of its remote districts.

Takhar is surrounded by two relatively volatile provinces, Badakhshan in the east and Kunduz in the west where Taliban militants are actively operating and frequently carry out insurgency activities in their various districts.