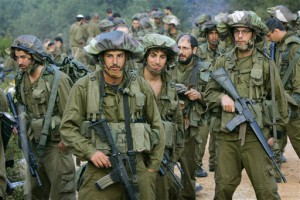 The IDF held a series of intensive drills around the country in the past week, part of a directive issued by recently appointed Chief of Staff Lt.-Gen. Gadi Eisenkot, who placed war training back at the top of the military’s priorities.

One of the exercises took place in the Jordan Valley, where the Artillery Corps 282 Support Unit spent five days training for war against Hezbollah in Lebanon. Although the unit of conscripts holds this type of drill annually, this year was different due to the scope and variety of live fire employed, according to a senior Artillery Corps officer who spoke to The Jerusalem Post.

“What is special in our unit is its fusion of a variety of surface- based firepower,” he said. The unit can deploy cannons to strike ground targets, precision- guided Multiple Launch Rocket Systems, and the Spike [Tamuz] electro-optical fireand- forget missile.

It can also employ a radar battalion that can look far beyond the immediate battle zone, to locate enemies, provide early warning of incoming fire, and pass on target coordinates for return fire in seconds.

All of this activity simulated a full-scale war in southern Lebanon, the source said. Until last week, “my battalions were in Judea and Samaria, doing daily security missions. On Saturday night, they switched to a livefire drill,” he said. Usually, a full-scale drill of this kind comes at the end of a gradually escalating exercise, involving more and more military units. This time around, the source said, the Artillery Corps flipped things around, and started with the biggest drill.

“Together with the Armored Corps’ 7 Brigade, we held two-division exercises. We want to create the most realistic simulation, so this had to involve live fire,” he said. The unit moved from Ma’aleh Efraim to Beit She’an, activating the full range of its fire power – the first time this has happened in a drill, the source said.

“Our vision is to be the main ground-based firepower effort. Anyone who wants our support – infantry or armored units – has to know how to talk to us very quickly. We have the Digital Ground Army [command and control network] for that. All of the ground forces operate under one network,” he said.

This means that a tank or an infantry unit can ask for and receive precise firepower in very little time.

“The firepower is available because of the Digital Ground Army network. In the exercise, within a day or two, we saw this in action, we saw the units talking to each other.”

Ultimately, the officer said, the Artillery Corps would like to create what he called a “canopy of firepower” over maneuvering forces that move in hostile territory.

To accomplish that, artillery units will have to accompany maneuvering forces over the border rather than hang back and provide supporting fire, as they did during the conflict with Hamas in Gaza last summer. “In the North, I can’t stay back. I have to advance with the forces, at their speed. The link between the Armored and Artillery Corps enabled us to learn how to cater to each other’s needs. They will guard my units from threats in Lebanon, and I will provide very deadly and powerful firepower,” the source said.

“This integration is vital. The message I want to pass on to my battalion is: Do not be confused by past wars. We will not be standing back on the international border and firing in the next round. We will, it seems, find ourselves maneuvering with the forces, and we have to know how to integrate with them.”

A second senior IDF source said Thursday that the past week was unusual due to the intensity of the exercises, but stressed that all of them had been planned well in advance and had no relation to any recent developments.

“The goal this week is to increase our training, with an emphasis on reserves,” the source said. One of the big exercises was held by the IDF Technology and Logistics Branch, which saw 240 vehicles taking part.

“They tested a new command and control center and checked their ability to deploy heavy vehicles to battle zones. Around 1,500 reservists were called up by the Transportation Center,” the source said.

An additional large drill involved the Northern Command’s 36th reserve Armored Division, which, like the 282 Artillery Support Unit, used the Jordan Valley to simulate a Lebanese battleground. In that drill, tank fire capabilities were put to the test.

A third exercise involved the reserves, the Infantry’s 16th Brigade, and was held on the Golan Heights. “This centered on the actions a reservist brigade will have to take when it is called into action,” the source said. “We want to reach a situation in which a battalion commander will know that if a drill is scheduled for six months from now, it will be held on time,” he said.

“We want to stick to the intense training plan for 2015. We are approaching levels of training that are higher than in past years. The aim is to allow a maximum number of exercises,” he added.

The IDF has so far stuck to this plan, and, barring any major surprise security escalations, it expects to continue to do so in the coming months, according to the source.