You are here: Home / Europe / Senior French military chief: no end in sight to Iraq mission 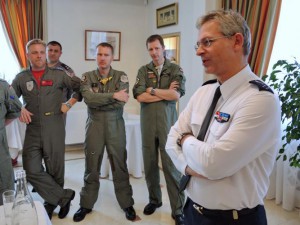 General Denis Mercier, Chief of Staff of the French air force, yesterday suggested that the next president of France will make a decision on future involvement in his country’s mission in Iraq. The election for the successor of Francois Hollande is not until 2017.

“The next president will decide if we have to stay or not, but we know we will stay for a long time, and thanks to that we prevent terrorism from going to other countries. This is a presidential decision. So the next end state will be the next presidential decision,” he said. “But I believe we will remain there and keep fighting terrorism there, because if we do not do that, for sure, in a few months terrorism will be in Paris.”

France has 12 jets committed to air strike missions as part of the international coalition. Mercier told a press conference that these jets are vital to ensuring that combined Iraqi security forces are able to take ground back from Islamic State (IS).

Mercier is soon to leave his post in France to become Supreme Allied Commander Transformation at NATO.