You are here: Home / Europe / Senior female Isis figure who helped recruit women from Europe to Syria is revealed as student from Seattle 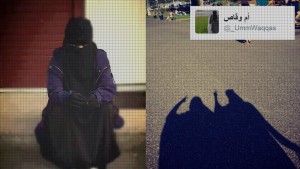 A senior female Isis figure who reportedly helped recruit women to join the extremist group in areas under its self-declared caliphate has been exposed as a student from Seattle, who may have been living in the city up until March this year.

The person behind the influential @_UmmWaqqas Twitter account has been revealed by Channel 4 as a woman in her 20s who lived and studied in the US.

Her Twitter account had a following of over 8,000 before it was suspended and shows that British recruits, such as Aqsa Mahmood, and other women from Europe were in contact with her in the days running up their departure. Mahmood goes by the name of ‘Umm Layth’ online and tweets from the @_UmmWaqqas  account included: “Legit I talk to @ummlayth everyday” and “Umm Layth has more BALLS than most men & more heart/iman to have left her home for Allah’s sake.”

She is also reportedly listed as a contact for recruits in a travel document explaining the best methods for reaching territories held by Isis in Syria.

The investigation found her Twitter account was accessed by someone in Seattle as recently as March, but her friends insist that she has since moved away. One told Channel 4 she may have relocated to Saudi Arabia, while another suggested she could be living in Denver, Colorado.

Some of her more extreme tweets justified the brutal killing of a Jordanian pilot and other atrocities committed by the group, including one that read: “I now get why they caged the man & then poured concrete on him… Whenever the muslims are bombed in their homes they have nowhere to run.”

However, her social media accounts also presented a passion for American football, the Super Bowl, eating takeout food with her friends and going to the gym, while photographs of her day-to-day life were found to show locations in and around Seattle.

In another tweet, Umm Waqqas said she was studying journalism at university before switching to teaching, declaring: “I no longer want to be a journalist (considering the bias news agencies etc) I know [sic] want to be a TEACHER!”

Channel 4 said she refused to answer allegations about her activities and whereabouts when they approached her on social media. She now appears to have stripped her Facebook account down and changed the name of it.