You are here: Home / Mediterranean / Senior Fatah official: U.S. is No. 1 enemy of Palestinians

A senior official from Fatah, the party of Palestinian Authority President Mahmoud Abbas, called the United States “the number one enemy of the Palestinian people” in a recent television interview. 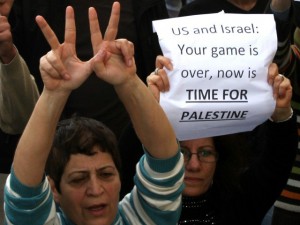 Jamal Muhaisen, a member of the Fatah Central Committee, made the comments in an interview aired on official PA TV on March 23.

In the interview, parts of which were translated by the Middle East Media Research Institute (MEMRI), Muhaisen also regurgitated an anti-Semitic trope alleging Jewish efforts to control the world. In Muhaisen’s view, the Jews control America, which in turn wreaks havoc across the Arab world at the Jews’ behest.

“When the U.S. presidential candidates meet with AIPAC, they are not meeting them as American citizens but as representatives of the State of Israel,” he added.

Muhaisen then went on to accuse the U.S. and Israel of being responsible for the plight of the entire Arab world:

In my view, the Arab regimes understand that the U.S. is not innocent when it comes to what is happening in the Arab region. Bernard Lewis, adviser to former US President Bush, published a report dealing with the division of the Arab world into 57 states. In her book, Hillary Clinton mentioned that the Americans created ISIS. The goal had been to tear the Arab world apart.

He added that the Arab world was already “torn apart” by the 1916 Sykes-Picot agreement and “today they want to partition what has already been partitioned.”

In the past, he said, “they partitioned the region in order to help establish Israel. And now they are doing it so that Israel will control the region.”

The Fatah official accused Sunni Arab states of “not understanding that their main battle is with Israel.” His comments come after several Sunni states have made more or less overtly positive remarks regarding Israel in the wake of the Iran nuclear deal.

“I’m sad that I blame all the parties in the region that have deviated from the Arab-Israeli conflict and are focusing on others,” Muhaisen said.

The US “certainly plays a role in this, it is always making the Arab regimes pay a price,” he added.