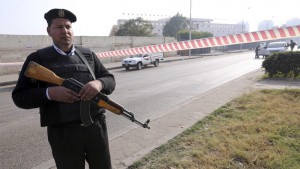 A top police officer has been killed in a drive-by shooting by Islamic State group jihadists in Egypt’s restive north Sinai.

Assailants in a car yesterday opened fire at a police point killing Major General Khaled Kamal Othman in Al-Arish city, the Ministry of Interior has said.

The police forces cordoned the area and currently searching for the attackers, the statement said.

Later, Egypt’s branch of the Islamic State group claimed responsibility of the attack.

Egypt’s North Sinai has witnessed many violent attacks by militants since the January, 2011 revolution that toppled the ex-president Hosni Mubarak.