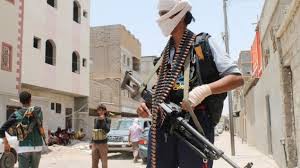 Pro-government fighters in Yemen report they have killed a senior al-Qaida leader along with at least two other militants.

Ali Abed al-Rab bin Talab, better known as Abu Anwar, was the head of a court set up by al-Qaida in Yemen’s largest province, Hadramawt, which the extremist group largely controls.

Al-Qaida and Islamic State-linked militants have exploited the chaos of Yemen’s civil war to make incursions into the strategic port city, where militant attacks on pro-government officials have escalated in recent months.

Al-Qaida’s Yemen branch is considered by Washington to be the most dangerous offshoot of the terror network.

Yemen’s crisis erupted in September 2014 when Houthi rebels seized the capital, Sana’a, forcing President Abdu Rabu Mansour Hadi’s government to flee first to Aden, and then to Saudi Arabia when the rebels took over the port.

Yemeni forces, backed by Saudi-led airstrikes, have since retaken Aden, but Yemen’s capital is still under rebel control.

The airstrikes and fighting on the ground have killed close to 6,000 people and created a severe humanitarian disaster in Yemen. U.N. experts say close to 80 percent of the population is in dire need of food and basic health care.