You are here: Home / MidEastGulf / Sending soldiers to Syria 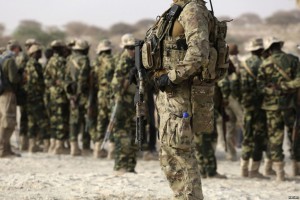 On February 4, 2016, the chief spokesman for the Saudi military announced that Saudi Arabia would be willing to contribute ground forces to the campaign against the so-called Islamic State in Syria, if asked to do so by the leadership of the 65-country anti-Islamic State coalition led by the United States. Claiming equivalence with the Saudi-led campaign against the Houthi rebels in Yemen, the spokesman explained that Saudi Arabia was very aware that the Islamic State could not be defeated from the air alone. On February 7, the UAE, while stressing that its number would be small and its role limited, also offered to send troops as part of a U.S.-led ground force against the Islamic State, repeating an offer it had already made last year.

These remarks from the Gulf states may have come in response to criticism last month from U.S. Secretary of Defense Ash Carter that most coalition partners were doing nothing at all to help the military campaign. Both the White House and the Pentagon have welcomed Saudi Arabia’s offer and Secretary Carter will be in Brussels this week to discuss with all members of the coalition how to step up the fight.

The third country to openly discuss sending troops into Syria, and one that has already sent a limited training contingent into Iraq, is Turkey. President Erdogan is reported to have said last week, as he returned from a swing through Latin America, that he had made a mistake in 2003 by not contributing more actively to the U.S. invasion of Iraq, and that Turkey should play a more dominant role if a similar situation arose in Syria. Erdogan is certainly more concerned about assuring Turkey’s role in regional politics than defeating the Islamic State, but with the sharp disagreement between Turkey and the U.S. over the role that the Kurds might play in the fighting, it is hard to see how the two countries could join forces.

The differing objectives among the countries that are most likely to contribute to a coalition ground force continue to bedevil the alliance. If for Turkey the conflict is mainly about Assad and the Kurds, then for Saudi Arabia it is mainly about Iran, and for the UAE it is mainly about its relationship with Saudi Arabia and the United States. These competing or overlapping interests will test the coalition as it contemplates next steps, especially now that the rebel forces backed by its member states have suffered serious setbacks around Aleppo and in the south. The United States’ objectives are focused first on the Islamic State and secondly on re-establishing a measure of regional stability. It already has Special Forces fighting in Iraq, as does the United Kingdom, whose main interest is in showing its allies and enemies alike a measure of competent engagement. Both countries’ forces have taken casualties, including at least one death on the U.S. side.

But even though the whole world is opposed to the Islamic State, the two other countries that have troops in Iraq and Syria, Iran and Russia, see things differently than the coalition. Although Iranian forces have helped push the Islamic State out of territory in Iraq, they have only fought other rebel groups in Syria. For Tehran, fighting the Islamic State is less important than strengthening the pro-Iranian governments in Baghdad and Damascus. Russia is in a similar position; its air power has finally proved its worth in support of Assad’s campaign against rebel groups, and Russian forces have been engaged on the ground alongside the Syrian army. Still, however, the Islamic State remains of secondary concern.

Another problem facing the coalition is the legal basis on which it might attack the Islamic State on the ground. Although Iraq has welcomed U.S. and UK contingents, it will not welcome Saudi troops or additional Turkish forces. Syria likewise will not accept any coalition troops unless they attack targets selected by the Syrian government. This rules out any ground intervention unless mandated by the United Nations Security Council, which will not reach such an agreement any time in the foreseeable future.

Furthermore, if coalition forces enter Syria, they will likely meet Iran-backed militias, or even Iranian troops, and will be vulnerable to Russian attacks—increasing the risk of regional conflict. The Syrian government—believing that the objective would be to force regime change, not just drive out the Islamic State—has already maintained that if any troops from the Gulf intervene in the country, they will return home in coffins. The Iranians have also scoffed at the idea of a Saudi intervention, without considering that the offer to fight the Islamic State might provide a possible area for cooperation.

In the meantime, thousands more refugees have fled towards Turkey and Jordan. Turkey is setting up camps on the Syrian side of the border, trying again to establish the safe zone that it called for earlier in the war. But these efforts could come to nothing quite quickly if the Syrian army is able to continue its advance to the north, pushing a desperate population ahead of it. Sooner or later, something must break in Syria beyond the spirit of its people, but it is not yet clear what.