You are here: Home / Senza categoria / Send in SAS to crush Jihadis: demand for action after beach slaughter 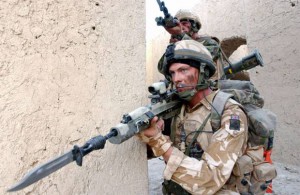 Colonel Richard Kemp, the former commander of UK forces in Afghanistan, said the elite troops should be moved to Syria, Libya and Iraq to fight jihadist thugs.

Following the atrocity in which at least 30 Britons were killed on a Tunisian beach by an IS gunman, Col Kemp said the regiment should be expanded and equipped for long-distance desert warfare while Allied airstrikes should increase 10-fold.

He said: “The gloves must come off. It has to be brutal and harsh.

There will be casualties but politicians will have to accept that.

“To succeed, this must not be a half-hearted effort. It requires a significant financial investment.

But increased intelligence efforts on the ground will mean airstrikes will be more successful too.”

He echoed former head of the army Lord Dannatt who warned Britain might have to prepare for “large-scale ground operations”.

“We always want to win hearts and minds,” he added, but said IS “needs to see that we are a winning side”.

Asked if enough was being done Lord Dannatt said: “The short answer is no.

We are not doing enough right across the piste.

“On military lines we have got to do much more to support those in the region who are fighting Islamist extremists on the ground,” he added.

“More training teams, better equipment and really giving those who are willing to fight the best chance of succeeding, because to succeed on the ground is the really important thing to do”.

British forces in the Kurdish north of Iraq have trained more than 1,200 Peshmerga fighters in combat skills as part of the global

coalition formed to fight IS.

Lord Dannatt added: “There’s got to be more leadership… and we must use every possible technique including the possible use of special forces – ideally indigenous special forces – to do the things that we need to do.”

The independent crossbench peer said that the battle for “hearts and minds” must involve Muslim leaders, adding: “There has got to be a narrative coming out of mainstream mosques in Europe.”

He said Britain’s military had been weakened by defence cuts and added: “It’s time to see some leadership from Middle East countries which are in the front line. It’s their regimes which are most at threat.”

Former defence minister Gerald Howarth warned: “We have to be prepared to put boots on the ground if the current strategy fails.”

Speaking at the weekend about the security risk, Prime Minister David Cameron said: “There’s no doubt we face a very severe threat in our country and have done for many months and many years.”

He vowed that “terrorists will not succeed” and said that if people worked together “we can combat this poisonous narrative of Islamist extremism that is radicalising too many young minds in our country”.