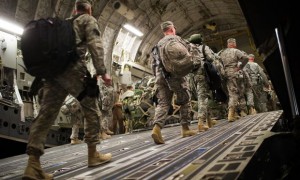 Graham believes the administration should increase the number of military advisers in Iraq from 3,500 to 10,000 to include special operations forces to help the Iraqi military on the front lines and improve the accuracy of airstrikes.

He said that a similar number of troops should be sent to Syria to assist regional forces and combat the Islamic State (ISIS).

“I am offering a solution to radical Islam that will be hard, but I think it’s the right solution,” he said, according to the Beacon. “It’s not because I like war, or because I want war,” he added. “It’s because I want to defend my nation.”

During his remarks Wednesday at the Atlantic Council, Graham also criticized rivals for failing to outline detailed plans to defeat the militant jihadist group and neutralize the growing influence of Iran. He reserved particular criticism for Democratic presidential front-runner Hillary Clinton and Sen. Rand Paul of Kentucky, both of whom have suggested that the United States could avoid deploying troops to the region.

“When I hear presidential candidates say they wouldn’t send more troops to Iraq, tell me, why you would expect a different outcome than what President Obama is doing today?” Graham said, according to the Beacon.

“Everyone running except Rand Paul could get a better [nuclear deal with the Iranians] than President Barack Obama could, he said, according to Politico.

He also said of Paul, “He is the one voice in our party who, I think, has been weaker on national security than President Obama,” according to the Beacon.

Graham touted his own foreign policy experience, noting that he had been to the Middle East at least 35 times, “busting my butt to understand what’s going on on the ground,” the Beacon reported.

“They know me and I know them” he said of leaders in the region, according to the Beacon. He added that the president “consistently oversells our success and minimizes the threats to the nation.”

“Elections are about choices,” he said, according to Politico. “You have [17] people to choose from as of this morning on the Republican side, you’ve got several on the Democratic side. When it comes to foreign policy, Lindsey Graham offers a very clear and different path. The path that I embrace is going to be tough, but the outcome would ensure a safe America.”

Graham also said that he would not have invaded Iraq in 2003 based on the information we now have, a question that caused former Florida Gov. Jeb Bush to stumble earlier this year.

But he said he would have “tried to push Saddam [Hussein] out” because of the former Iraqi dictator’s gas attacks on the Kurds and violations of United Nations’ resolutions, the Beacon reported.