You are here: Home / MidEastGulf / Security tightened in Tehran amid fear of Daesh attack 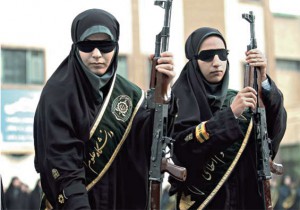 Iran’s capital Tehran has seen an unprecedented security tightening amid concerns that a country that has taken an active roll in the fight against Daesh could become a target for the terrorist group.

Hussain Sajedinia, Tehran’s police commander, acknowledged this weekend that police numbers had been beefed up to ward off “any possible threat” and to make the citizens “feel secure”.

“These anti-terrorist measures will continue as long as needed,” he said, adding this did not mean an attack was imminent. “Tehran enjoys complete security,” Sajedinia added.

But a wave of attacks claimed by Daesh, culminating in last month’s terrorist rampage in Paris, has heightened concerns that the militant group could be planning an attack in Iran. Turkey, Tunisia and Egypt have been the targets of Daesh terrorist attacks this year.

Tehran insists it has not sent troops to Iraq or Syria, although it has admitted that to the presence of military advisers in both countries. However, the increasing number of Iranian deaths raises questions about a deeper military involvement.

Frustrated with Syria’s weak and corrupt military, Iran has also been recruiting militia forces in an effort to keep Syrian President Bashar Al Assad in power.

Iran’s strategy has for many years been that fighting its enemies outside its borders lessens the risks of an attack at home.

“We strengthen our defensive strongholds outside our borders because if Iran did not go to fight Daesh there, we should welcome them on our soil,” Ali Akbar Velayati, senior foreign policy adviser to Ali Khamenei, Iran’s supreme leader, said this week in Syria.

The heightened security situation comes as at least 1.5 million Iranian pilgrims travel to Iraq to take part in religious rituals on Wednesday to commemorate the 40th day of the martyrdom anniversary of Imam Hussain, grandson of Prophet Mohammad (PBUH) and the third Shiite Imam. Contrary to previous years, Iran has banned pilgrims from crossing the Iran-Iraq border without passports and proper visas.

Rumours have also been circulating on social media that some airports could be targeted, as well as the shrine of Imam Reza in the city of Mashhad, Iran’s most important Shiite holy site.

Iranian officials say that despite the threat, their security measures have prevented Daesh from mounting attacks.

“They [Daesh] have always threatened attacks but they have never had the power to resort to any measure against Iran,” Abdolreza Rahmani-Fazli, Iran’s interior minister, said last week.