You are here: Home / Europe / Security high at Brussels stations

Authorities say security will remain high at railway stations in Brussels as they investigate the detonation of an explosive device at Central Station, like reported by sbs.com.au 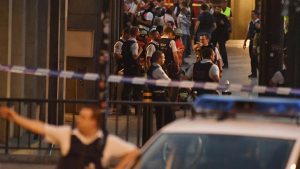 A Belgian government official says security will remain high at Brussels rail facilities after a man blew up an explosive device at the city’s Central Station.

The man was shot by soldiers after detonating a small device late Tuesday. He lay still for several hours while a bomb squad checked whether he was carrying more explosives and later died. No one else was hurt.

Central Station re-opened on Wednesday morning. Burn and blood marks remained on the floor at the scene, as workers continued to clean up and paint the area.

Witnesses spoke of a man who shouted Islamist slogans, including “Allahu akbar” – God is greater – in Arabic, in an underground area of the station still busy with commuters making their way home and seemed to set off one or two small blasts.

Security experts said Tuesday’s incident could have been similar to “lone-wolf” assaults carried out by radicalised individuals with limited access to weapons and training.

He warned “against a society where we always and everywhere will be checked. If we do that, it would be fulfilling the aim of the terrorists.”

“If you protect yourself everywhere against anything, in the end we will end up in a police state,” Jambon said.

Belgium has been on high alert since suicide bombers killed 32 people at the Brussels airport and a subway station on March 22, 2016.

Federal prosecutors, who visited the Central Station overnight, were due to hold a press conference shortly.