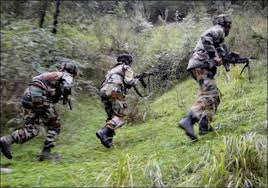 The officials said that the gun battle resumed this morning after heavy fire was exchanged between the holed up militants and the security forces.

Acting on specific input about the presence of militants in Ratnipora area of the district, a joint team of police and army cordoned off the area and launched a search operation late on Monday.

As the search operation was on, the hiding militants fired upon the security forces. The forces retaliated triggering an encounter, police said.

Firing was on till last reports came in, they said, adding there were no casualties so far in the gun battle.

Meanwhile, protests broke out in the surrounding areas of Rantipora this morning after the encounter resumed.

According to the police, some youth in the surrounding area of the encounter site engaged in minor stone pelting on the security forces.

The protests were going on when the last reports came in, police said, adding no one was injured in the clashes.