You are here: Home / West Asia / Security Forces kill all attackers near Russian Embassy in Kabul 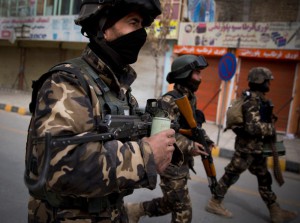 With killing of all attackers, the operation of security forces ended near Russian Embassy in Kabul.

A Number of armed attackers entered a house which is said to be the guesthouse of a governmental official and from that place, they carried out indiscriminate shooting.

Eyewitness said to BNA, in first one of the attackers carried out suicide attack with a car packed explosive and others entered to the house.

Abadullah Karimi spokesman of Kabul security directorate told BNA reporter, the incident was ended with killing of all attackers.

According to the source, there were no any harm and casualties to militaries and civilians, but seven police officials were slightly wounded in the incident.

It is said that some residential houses were also damaged in the incident.