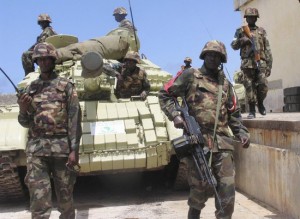 The UN Security Council on Tuesday unanimously adopted a resolution to extend the mandate of the United Nations Assistance Mission in Somalia (UNSOM) until March 30, 2016 to support the political process in the country.

The 15-nation UN body also reauthorized the African Union Mission in Somalia (AMISOM) until May 30, 2016, according to the resolution.

The adoption of the resolution came after the Al-Shabaab deadly attack against a hotel in Mogadishu, Somalia, which has caused numerous deaths, including one member of security staff from the Chinese Embassy.

The Somalia-based militant group linked with al-Qaida said that the attack was to retaliate against the recent operations by AU and Somali forces in the southern Somali regions of Dinsoor and Bardhere, and that they targeted the hotel because it houses ” Western” embassies coordinating the offensive.

The resolution underlined the most powerful UN body’s respect for the sovereignty, territorial integrity, political independence, and unity of Somalia, while condemning the recent Al-Shabaab attacks in Somalia.

UNSOM’s mandate was most recently extended in May by the council until Aug. 7, 2015. The political mission was established in 2013 to provide the United Nations “good offices” functions — and a range of strategic policy advice — in support of the Somali government’s peace and reconciliation process.

In a recent briefing to the Security Council, Edmond Mulet, assistant secretary-general said a UN peacekeeping mission in Somalia would be a “high-risk undertaking,” considering the threats posed by Al-Shabaab militants and despite advances made by the AMISOM.