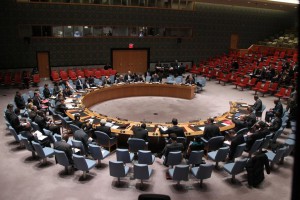 The Security Council today extended the mandate of the United Nations Support Mission in Libya (UNSMIL) until 15 March 2016, while underscoring that there can be no military solution to the ongoing political crisis.

In a unanimously adopted resolution, the 15-member body called for an “immediate and unconditional” ceasefire in the North African nation, which has been plagued by factional fighting since the 2011 revolution and where situation has continued to deteriorate in recent months amid significant political fragmentation and violence.

In July, a number of Libyan leaders initialled a political agreement at UN-facilitated talks that had been under way in Skhirat, Morocco, in an effort to resolve the country’s political crisis.

In its resolution, the Council urged all parties to “engage constructively” with the efforts of UNSMIL and the Secretary-General’s Special Representative, Bernardino León, to finalize the political agreement, and called for the immediate formation of a Government of National Accord and agreement on interim security arrangements to stabilize the country.

The Council also underlined that the situation in Libya has been exacerbated by the smuggling of migrants and trafficking in persons from and through Libyan territory and voiced its grave concern at the endangerment of lives in the Mediterranean Sea, in particular off the coast of Libya.

Furthermore, Council members condemned the use of violence against civilians and institutions, including attacks on airports, and called for those responsible to be held accountable.

Also today, Mr. León told reporters in Skhirat that a new round of talks, which he hoped will be the final round and “the moment of truth for the parties,” was beginning. “We are very hopeful that they will understand that this deadline of the 20th of September must be the last one, must be the one that will allow Libya to get out of this crisis.”

He also informed the media of some “very concerning news,” including the killing of more civilians, especially some kids in Benghazi; the reported takeover by Daesh of the offices of the Libyan Central Bank in Sirte as well as some private banks.

“The international community is not only condemning this but also asking the Libyans to understand that enough is enough,” Mr. León stated.