You are here: Home / Analysis / Sectarian violence will be an issue post-ISIL 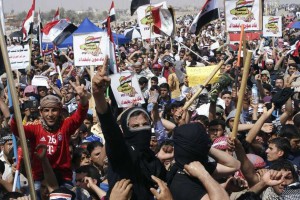 Coalition forces are gaining ground against ISIL, which shows that all is not despair in the struggle with extremism.

The most prolonged of these bloody battles is likely to be for the biggest prize: Mosul. The 940,000-strong coalition forces plan to advance through the predominantly Christian town of Qaraqosh, where ISIS has already wreaked terror on minority communities.

No outcome is free from sadness. Already there are reports that ISIL is using civilians as human shields. As we rejoice at any gains made by these liberating forces, we must also raise concerns about continuing human rights violations, not only by ISIL but also reportedly by coalition members.

They have a duty to protect civilians from death and injury and ensure that their liberty is protected as far as possible. The liberating armies must be pressured to guarantee that when they wrest control of areas once terrorized by ISIL, no factionalism or sectarianism causes those kinds of human rights violations that allegedly occurred when Anbar province in Iraq was liberated.

During that campaign, it was reported that Yezidi and Sunni minorities were attacked and brutalized by Shia militias fighting for the government. One Free World International’s website claimed: “During the fight for Anbar, Yazidi and Sunni civilians were indiscriminately killed by the liberating forces, with a report of 55 Yazidis being killed in one compound alone and hundreds more throughout the campaign that pushed ISIS from Anbar province.”

Such news is extremely distressing. Even an official investigation conducted by the government of Anbar province conceded that militias killed about fifty people, and that another 700 or so men were listed as missing.

Anbar provincial governor Suhaib Al Rawi, the governor of the province, issued this statement: “Iraqi troops continue their advance into Fallujah, but with it, images of inhumane acts and abuse have come out, perpetrated by some armed groups that are sectarian in every sense.” He also told Al Jazeera that “more than 49 civilians have lost their lives under torture.”

Fears of human rights violations are therefore real. This is a region where centuries of sectarian hostility, only temporarily frozen by dictators, have molded identities into “us and them” tribes. The terrifying daily conflict in Iraq and neighboring Syria provides ample evidence of such sectarianism in the lethal skirmishes between various brands of Shia and Sunni Islamism. This is antagonism ISIL did not cause, though it has been quick to exploit it.

The demise of ISIL as an occupier will do nothing to allay fears of never-ending tribal hostility. There are three broad categories of factions in this bloody war: the Shias, the Sunnis and the Kurds. The three need to forge a plan to live together in peace or devise a way to separate with dignity. Neither solution is likely unless developed countries, including Canada, make a commitment to help.

Meanwhile civilians continue to suffer. The United Nations has helped mitigate massive civilian suffering in this ravaged area by providing tents and temporary facilities to accommodate 400,000 people. However, the expected exodus from the violence and persecution is closer to an overwhelming one million.

Soon ISIL will likely be reduced to small groups of desperate cells operating from the shadows. Hopefully coalition soldiers – including Canadians – can not only oversee the provision of aid in the form of food, shelter and medicine, but also moderate any hostility between sectarian groups.