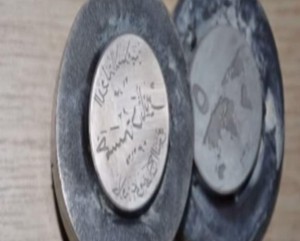 Pressing equipment and dozens of newly minted coins were seized by police in the southeastern city of Gaziantep near the border with Syria during a raid on Wednesday morning.

Six foreign nationals were arrested and have been remanded in custody, The Times reports.

Isis currently controls a 50-mile stretch along the Turkish-Syrian border to the south of the city and the currency has been declared the only legal tender in its territory.

The terrorist group first revealed their new currency in a propaganda video in August.

They said it was part of plan to undermine “America’s capitalist financial system of enslavery.”

In the hour-long video, Isis said gold could be the true measure of wealth and America’s reliance on bonds and oil were its “Achilles heel”.

The currency is made up of gold dinars, silver dirhams and copper fulus.

The jihadists claim that because the gold dinar will be 21-carat, it will worth $139 (£91) and will destroy the American economy.

Photographs of the haul show five dinar coins stamped with a map of the world on one side and an Arabic inscription reading “The Caliphate that follows the Prophet’s steps” on the other.