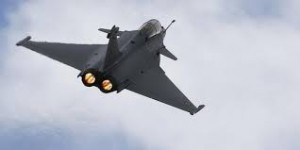 French warplanes have carried out a successful second wave of airstrikes on ISIL in Syria, hitting a training camp.

“The objectives were accomplished.”

The operation was France’s second airstrike in Syria, and followed its first airstrike on September 27.

“The Russian military action in Syria over the past 10 days does not target Daesh, their main aim is the security of Bashar al-Assad,” he said.

Earlier this week, French President Francois Hollande said that failure to act in Syria would risk stoking a “total war” in the Middle East.