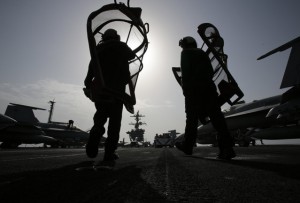 EU defence ministers will discuss military cooperation in the Foreign Affairs Council with NATO Secretary General Jens Stoltenberg to “take stock of action” to counter irregular, after it was resolved that EU member states should carry out military strikes on smugglers’ boats and even send boots on the ground of Libyan shores.

“To the south, conflict has become a common feature of much of the region affecting in particular Syria and Libya. Conflict and instability led to increased migratory pressures and to the exploitation of refugees by traffickers. The rise of Da’esh/ISIL has further destabilised the region.

“In addition, terrorist and other attacks in several member states have impacted on the internal security situation. Demands for the EU to act as a security provider are therefore likely to keep increasing,” the European Council said in a background note to the meeting.

On 23 April, EU leaders committed to undertake systematic efforts to identify, capture and destroy vessels of human traffickers and smugglers before they are used.

Leaders also agreed to increase EU support to key transit countries to monitor and control their land border and routes.

The EU is seeking approval from the United Nations for its plan, which would allow it to go after smugglers in Libyan waters — and possibly even on land.

Italy is expected to take charge of the mission, with the UK, Spain and France and maybe as many as 10 EU countries in total taking part.

Russia has made it clear that it opposes the use of jets and helicopters, and would support only a naval operation. But there are questions about whether EU naval operations could include destroying traffickers’ assets “ashore,” possibly by sending special forces units for targeted operations in Libyan ports.

“How would the EU forces differentiate between a smuggling boat and a fishing boat?” German MEP Reinhard Bütikofer, co-chair of the European Green Party, has asked.

“What would they do if they got attacked by one or the other side of the Libyan conflict? How could they avoid civilian casualties when operating in Libyan harbors? The EU must not slide down this slippery slope.”

EU foreign policy chief Federica Mogherini said the EU will go ahead even without UN backing although with the military operation far from Libyan airspace and waters.

Ministers will also debate a binding quota system for relocation to move asylum seekers from EU one member state to another, and a recommendation for an EU-wide resettlement program for taking people in from outside the EU, setting an overall figure of 20,000 asylum-seekers over two years.

France and other eastern European countries oppose the quotas.