You are here: Home / MidEastGulf / SEAL raid In Yemen signals shift in anti-terror strategy under Trump 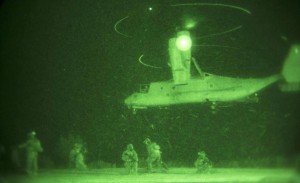 A daring special operations raid into Yemen was approved by the White House and executed this weekend, leaving one US soldier dead and three wounded. Details remain sketchy, but a group made up primarily of America’s most notorious tier one counter-terrorism force, SEAL Team Six, flew into war-torn Yemen to raid an al Qaeda in the Arabian Peninsula (AQAP) headquarters in the al-Bayda region of the country. The raid was supposedly a kill-capture and site exploitation operation aimed at the group’s key leadership, including AQAP kingpin Qasim al Raymi, like reported by thedrive.com .

The SEALs experienced an hour-long firefight after arriving on target under a moonless night sky. The team supposedly killed 14 AQAP operatives in the surprise assault, but also suffered one KIA and three wounded in the process. A V-22 Osprey (it is unclear if this was a Marine MV-22 or USAF CV-22) that was evacuating casualties during the operation experienced a hard landing and was destroyed by choice as the team exfiltrated the target area. Multiple structures were also said to have been obliterated by airstrikes during different phases of the assault.

Although nobody was said to have been captured in the raid, large amounts of intelligence that could potentially lead to future raids and targeting of AQAP assets was reported to have been obtained in the operation.

A followup drone strike against a pair of AQAP leaders in a vehicle reportedly occurred just hours after the raid ended. The occupants of the vehicle remain unknown, but it was said to have been destroyed.

All these details may change over time, and the Trump administration has made it clear that it intends to be far more tight-lipped about military operations than its predecessor. But one thing is clear: this is the first death of a US serviceperson in combat under the command of President Donald Trump. It also marks the first known major military operation involving troops in combat under the Trump administration.

President Obama got his last punch in against islamic extremists just a day before leaving office via a relatively large-scale air strike against ISIS-related elements in Libya using B-2 Spirit Stealth bombers.

The White House made the following statement concerning the mission and the loss:

“Americans are saddened this morning with news that a life of a heroic service member has been taken in our fight against the evil of radical Islamic terrorism.The sacrifices made by the men and women of our armed forces, and the families they leave behind, are the backbone of the liberty we hold so dear as Americans, united in our pursuit of a safer nation and a freer world.”

The US has held a steadily increasing presence at Camp Lemonnier in Djibouti, including special operations forces, helicopters, fighters, surveillance aircraft, and drones. Most aerial operations into Yemen and surrounding areas are launched from this base, and from US Navy amphibious assault ships deployed to the area from time to time.

A special operations mission that strikes deep into the heart of a war-torn country like Yemen leverages a whole array of assets, including transport, surveillance, and tactical air support aircraft. Since a civil war continues to smolder in the country, and Saudi Arabia and Arab gulf states have reignited operations in and over the country, coordination with these separate elements may have been required in order to deconflict the airspace and to make sure no deadly mistakes were made.

The thing is, although US special operations forces have been active in western Africa, they have largely stayed out of Yemen since the country sunk into civil war two years ago. Nearly all known US operations in the country have been targeted assassination and surveillance missions executed by unmanned aircraft. Two occurred just days ago, only a few days after Donald Trump took up shop in the Oval Office.

But the use of “boots on the ground,” especially in such a high-risk and offensive manner, appears to be something new, and is likely a sign of President Trump’s more aggressive war on islamic extremism.

The last known time US Special Operations forces executed a major operation in Yemen was in 2014, during a rescue operation to save an American hostage that was being held by AQAP operatives. A small team of special operations forces was also sent last year to assist UAE units operating in the country, although this unit was only there to advise and to help with intelligence gathering and exploitation.

Over the last eight years, American Special Operations forces have been active in established war zones like Iraq, Syria and Afghanistan, but they have been less so when it comes to executing penetrating raids in non-established areas of operation. The raid against Osama Bin Laden even took months for the Obama administration to approve, and only after careful consideration and micromanagement of the plan by top White House officials. Instead, the Obama Administration had relied very heavily on targeted assassination by unmanned aircraft to fight the global war on terror, especially in countries where American military presence is nil.

This practice has been effective when it comes to keeping major terror groups’ leadership in flux and their communications truncated for fear of interception and targeting. At the same time many have argued that this lower-risk, “whack a mole” way of fighting these terror groups makes it impossible to garner intelligence that will allow for the systematic destruction of an entire terror network. In other words, dead men can’t talk and blown-to-bits computer hard drives and severely burned cell phones are useless when it comes to rendering actionable intelligence.

With this in mind, Saturday’s raid in Yemen may be a sign of what’s to come. A new reality in which there is less reliance on simply killing the enemy when opportunities to do so represent themselves, and more reliance on putting special operators on the ground to grab key individuals and/or intelligence directly off the battlefield.

Obama’s drone program fit his administration’s wish to empty America’s controversial detention center at Guantanamo Bay, as well as his push to end rendition programs and to stick closely to America’s no-torture laws. This policy was viewed as noble by some, and by others as highly hypocritical.

Some would argue that shooting a Hellfire missile through a window of a building and killing everyone inside—and possibly some people outside—based on questionably defined intelligence, is far more cruel and unjust than capturing those targeted individuals, interrogating them and sending them to military tribunals. Outside of the torture debate, somehow being executed by drone became more morally acceptable than actually killing or capturing the enemy on the battlefield via real soldiers. The latter certainly presents a lower-risk politically and to US soldiers than the former, but questions of just how much damage the enhanced drone assassination program was doing to America’s image abroad also became a major sticking point with the strategy.

If Trump and his national security team are indeed going to make a major push to kill or capture high value targets around the globe using commandos as a way of drastically increasing the clarity of America’s intelligence picture, it will not go without major resistance at home and abroad. Americans are sick of hearing about KIAs after a decade and a half of perpetual warfare, and many at home and around the globe dread a return to the “optics” of the counter-terrorism realities of the Bush years. At the same time, a change in tactics could drastically increase the Pentagon and the CIA’s chances of dealing out crescendos of crippling blows to the enemy and eradicating some formal terror networks once and for all.

With all this in mind, what we are likely to see is not one or the other—increased drone strikes or increased targeted special operations raids—but more of both. Much more.

In essence, the Trump administration is showing signs that they plan on loosening the rules of engagement against terror-related targets, anywhere in the world, on an unprecedented scale. This will likely mean spinning-up operations at Guantanamo Bay, which is down to just a few dozen or so prisoners at this time, as well as unleashing the special operations community and increasing drone operations to target terror networks wherever they reside. The possibility of restarting extraordinary rendition and black site operations to pair with this greater strategy shift also remains on the table.

As to what level of regard Trump will place the potential geopolitical ramifications of such acts is uncertain. Considering his core slogan is “America first,” and considering the inflammatory executive orders he has made just ten days into his Presidency, the answer is probably not much.

Although this may sound to some like an ambitious plan to take the fight to the, it is not without peril. With increased SOF raids, especially ones deep inside enemy territory with shorter planning and training cycles, comes higher risk. Things will go wrong, and a Black Hawk Down or Eagle Claw like event can deeply mire support for any special operations intervention abroad for years to follow. Also, a new very aggressive “and the kitchen sink” anti-terror strategy can also lead to a massive backlash abroad and especially in the Middle East, which can hamper future intelligence sharing and coalition operations.

There is also the argument that a very draconian counter terror strategy helps make more terrorists than can it can kill. Not just that but playing into terror groups’ narrative that the US is an imperial anti-Islamic force for which to wage Jihad against could make a larger and more complicated set of problems down the road than it solves in the near term.

We’ll have to wait and see how the Trump anti-terror strategy materializes, but if the last ten days tell us anything, it is going to be very different than what we have seen over the last eight years.