You are here: Home / MidEastGulf / SDF retreats to east bank of Euphrates 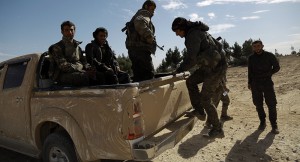 The US-backed Syrian Democratic Forces (SDF) retreated from the areas in southern Jarablus town in northern Syria  and near the Turkish border after they were ordered by the US-led global coalition to go back to the eastern bank of the Euphrates river  on Wednesday, August 24.

A source from Jarablus confirmed to BasNews that the Turkish-backed Syrian opposition forces entered the town and controlled the surrounding areas previously controlled by the SDF.

The source revealed that the SDF has withdrawn from those areas after confrontations erupted with the opposition forces in some villages in the south of the town. They had also received orders from the coalition to move back to the boundaries previously drawn for them in an agreement between Turkey and the coalition.

According to local sources, after the clashes, the Turkish-backed forces completely controlled the town of Jarablus with massive support from the Turkish and US warplanes.

Spokesperson for Operation Inherent Resolve (OIR), the US-led coalition against IS said earlier today in a statement on Twitter that “the Syrian Democratic Forces have moved east across the Euphrates to prepare for the eventual liberation of Raqqa, Syria”.

The Turkish army, equipped with tanks and jets and backed by the US-led coalition warplanes, launched an offensive into the Syrian territories on Wednesday, aiming to drive the IS militants out of the border town of Jarablus and prevent further gains by Kurdish forces as well.

As Ankara is saying, the Turkish intervention is to secure its southern border areas with Syria.