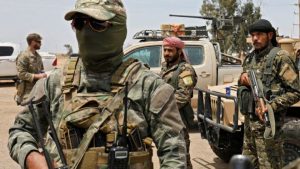 Fighters from the US-backed Syrian Democratic Forces have broken into Hajin, an eastern holdout of ISIS on the Iraqi border, a commander told Agence France Presse according to aawsat.com.

The SDF, made up of Arab and Kurdish factions, launched the offensive on the Hajin pocket on September 10.

“Heavy clashes are ongoing inside the town of Hajin, after our forces advanced inside and started to control some of its neighborhoods,” Redur Khalil told AFP.

The SDF opened up humanitarian corridors out of the beleaguered pocket, allowing more than 1,000 civilians — mostly woman and children — to flee from Hajin in the past few days, he said.

Khalil accused ISIS of using civilians as human shields, and said the corridors would remain open.

The Syrian Observatory for Human Rights, a Britain-based war monitor, said the SDF launched an attack on Tuesday and than dozens of families had managed to flee.

The attack was backed by the heaviest shelling and air strikes by the US-led coalition, Observatory chief Rami Abdelrahman said.

Since Tuesday, 34 militants including three suicide bombers, and 17 SDF fighters have been killed in the fighting, the Observatory said.

At the start of the offensive, the SDF had suffered a series of setbacks, including due to a vicious fightback by militants and bad weather that impeded visibility.

In almost three months of battle, more than 820 extremists and more than 480 US-backed fighters have been killed, the Observatory says.

On the other side of the border, Iraqi military sources said that US-led coalition forces destroyed 30 ISIS vehicles in an area bordering Syria.