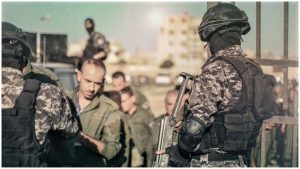 The Kurdish-led Syrian Democratic Forces (SDF), with support from the US-led Coalition, carried out several security operations against the so-called Islamic State in the northern Syrian Deir al-Zor and Hasakah provinces this week, like reported by kurdistan24.net.

The SDF’s Coordination and Military Operations Centre on Wednesday announced on Twitter that they carried out a new operation against Islamic State fighters in Hasakah city.

“After security monitoring and follow-up, and as part of a new operation targeting ISIS cells, our special units with the participation of the international coalition forces are arresting a member of an ISIS cell in Hasaka city and transferring him for investigation.”

Furthermore, on Monday, the SDF Military Operation Centre said they carried separate operations in both Hasakah and Deir al-Zor.

“With the air support from the international coalition, an operation by our special units in the northern countryside of Dair Al Zor, resulted in the arrest of 3 members of ISIS cells, and confiscated a set of equipment during the raid,” the group said in another statement.

The SDF also arrested a member of Islamic State in the southern countryside of Hasakah and seized military weapons and equipment.

Despite the SDF and the US-led coalition announcing the Islamic State’s defeat on March 23, 2019 in Baghouz, the terror group’s sleeper cell attacks persist in areas the Kurdish-led forces had liberated. Islamic State cells are especially active in Deir al-Zor where there are still some local networks that maintain some links to Islamic State members. Furthermore, Syrian regime cells and others linked to Turkey are also active in the region.

In early June, the SDF launched the Deterrence of Terrorism operation in southern Hasakah and Deir al-Zor to stop increasing Islamic State activity in this region, including militants taxing of residents and conducting assassination attempts against locals working with the SDF or the Autonomous Administration of North and East Syria (AANES).

According to a monthly report of the Rojava Information Centre (RIC) published Thursday, this week-long operation resulted in the arrest of 110 Islamic State suspects and caused sleeper cell attacks to fall 46 percent in northeastern Syria.

“SDF’s campaign of arrests put a dent in the constant sleeper-cell threat in North and East Syria, though a spike in assassinations indicates that the ISIS threat remains high,” Robin Fleming, a Syria-based researcher at the Rojava Information Center, told Kurdistan 24.

“Arson and attempted assassination attacks linked to the Turkish intelligence services and Turkish-controlled militias mean the Autonomous Administration faces security challenges on multiple fronts, even away from the active frontline around the zone of Turkish occupation.”

“The Coalition is supporting those operations and we’re continuing to have success. We have been successful in the past couple of months by going after leadership and smuggling networks of Daash (Islamic State) in northeastern Syria.”

“The SDF has completed a massive operation, what they call the Deterrence of Terrorism, supported by the Coalition with high-level advising, intelligence sharing, and occasionally partnered operations, where we may assist with air support, helicopter transportation, as well as over flights, drones and airstrikes.”

He also added that low-level Islamic State members that operate in Hasakah are not from the region and are often from Iraq, speaking a different dialect and being rejected by the local population, adding, “When the local residents in Hasakah encounter these terrorists in town, they rat them out to the SDF, and the SDF plans missions and catches them, and puts them in detention facilities.”

“Therefore, ISIS in Hasakah is struggling and ISIS in Deir ar Zour is also on the ropes. But the troops of the Syrian Democratic Forces, including the anti terrorist forces will continue to apply pressure, continue to conduct wide scale operations and precision operations and raids as long as there’s any ISIS around the coalition’s got their back.”