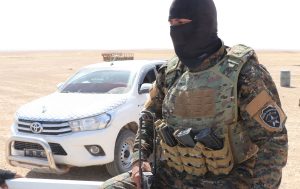 Kurdish-led forces in Syria have said another 250 ISIL (ISIS) fighters have surrendered as the United States-backed forces attempt to clear the last part of a prison seized by the armed group last week, like reported by aljazeera.com.

At least 300 ISIL members handed themselves in on Monday as the US-backed Syrian Democratic Forces (SDF) commandos moved into the facility in the northeastern city of Hasakah.

Clashes continued on Wednesday as the SDF tightened its siege on the prison. Dozens are still thought to be holed up inside, along with guards held as hostages and several hundred children.

More than 160 people were killed in battles between the SDF and the ISIL fighters after the armed group attacked the Kurdish-run Ghwayran jail on Thursday.

The deceased included 114 suspected ISIL fighters and 45 SDF personnel, according to the UK-based Syrian Observatory for Human Rights.

It was the biggest attack by ISIL in Syria since the fall of its so-called caliphate in 2019.

Meanwhile, fears have grown for about 850 children caught in the crossfire in the Syrian prison, the United Nations children’s agency UNICEF said on Tuesday.

The children were detained during US-backed campaigns that drove ISIL from its last territorial enclave in Syria in 2019.

Human Rights Watch and other rights groups have long criticised the Kurdish-led forces that control large swaths of northeast Syria for holding children in overcrowded, makeshift prisons in inhumane conditions.

Before the attack, Human Rights Watch estimated the SDF held at the prison about 12,000 men and boys suspected of ISIL affiliation, including 2,000 to 4,000 foreigners from about 50 countries.