You are here: Home / MidEastGulf / SDF arrests the most dangerous ISIS terrorist from France

SDF arrested a group of ISIS terrorists headed by Adrian Lionel Kayali whose nickname is Abu Osama, like reported by anfenglish.com 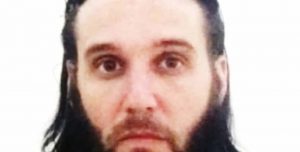 After conducting investigations and follow-up, special units of the Military Intelligence under Syrian Democratic Forces (SDF) carried out a special operation on Saturday, 19 May 2018, arresting a group of ISIS terrorists headed by Adrian Lionel Kayali whose nickname is Abu Osama.

Adrian Kayali / Abu Osama is from French origin, was born in 1983, and converted to Islam in 2003, influenced by jihadist ideology. He was arrested in France in 2010 on charges of belonging to a terrorist organization and later he was released. Then he joined ISIS ranks and crossed to Syria on the 6th of March, 2015 through Tal Abyad border gate which was considered the official border between Turkey and ISIS.

SDF forces were able to arrest him after the terrorists lost many cities including Raqqa province where Abu Osama was hidden, looking for a way to escape into Turkey, then to Europe.