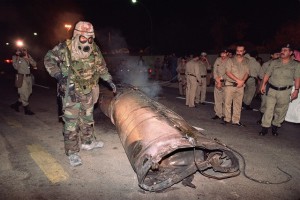 Saudi Arabia has shot down about 40 percent of some 20 Scud missiles fired by Yemen’s Houthi rebels, said the official, who is familiar with the issue.

He did not give further details on how South Korea reached the conclusion that the missiles originated from North Korea. He spoke on condition of anonymity because he was not authorized to speak to media.

North Korea is believed to have exported its missiles to some countries in the Middle East as part of its efforts to earn hard currency.

“North Korea has sold missiles to Yemen and sent missile engineers to that country in the 1990s,” said a former North Korean official, who was in a position to know about the arms deals.

The official, who later defected to South Korea, asked not to be identified, citing the issue’s sensitivity.