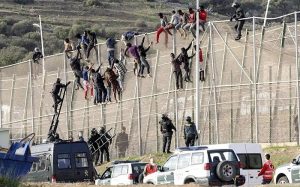 Spanish authorities say scores of migrants have stormed fences separating Spain’s North African enclave of Ceuta from Morocco in a bid to enter Europe, like reported by dailymail.co.uk.

The Guardia Civil says in a tweet that seven policemen were burned by acid and quicklime, a skin irritant, allegedly thrown by some of the migrants as they overran border defenses Wednesday.

Spanish news agency Europa Press says around 100 migrants made it onto European soil – a month after just over 600 migrants got past the high, barbed-wire fences in the year’s biggest assault.

Those who make it across head for temporary migrant accommodation centers and are eventually repatriated or released.