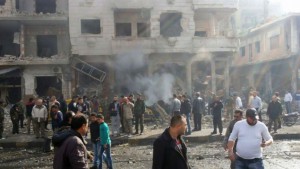 Three bombs ripped through a Damascus suburb Sunday, killing as many as 62 people as the Islamic State Group appeared to take responsibility.

The Aamaq news agency, which is affiliated with the group, said two IS fighters detonated a car bomb before blowing up their explosive belts in Sayeda Zeinab, a Shiite neighborhood.

Residents said the attack was about a kilometer (0.6 miles) from one of Shiite Islam’s holiest shrines but did not damage it.

The figure for the wounded has now risen to over 200, according to Syrian state TV.

Different figures are not uncommon in the chaotic aftermath of such attacks.

Hezbollah, a Shiite group loyal to Iran and fighting alongside Syrian government forces in the country’s five-year-old civil war, maintains a large presence in the Sayeda Zeinab area.

Syrian state TV showed still images of people running, damaged homes and billowing smoke. It provided no death toll. State TV earlier said two of the blasts were car bombs while the other two were suicide attackers on foot.

The blasts came hours after two explosions in the central city of Homs killed and wounded as many as 57 people.

Homs, once dubbed the capital of the Syrian revolution, has been hit with a wave of explosions in recent months, killing and wounding scores of people.