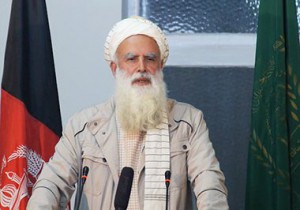 Abdul Rab Rasoul Sayyaf, leader of Dawat-e-Islami party and former Jihadi leader criticized the Taliban on Friday and said their leadership and management system was “non-Sharia” and un-Islamic and said the insurgent group was a puppet to foreigners. He did however call on them to end the war.

Speaking to journalists at his home, Sayyaf said the Taliban’s late leader Mullah Omar had been brutally tortured and then killed two years ago in Pakistan. Because of this no one was prepared to confirm his death, Sayyaf said.

“Mullah [Omar] was killed two years ago in Pakistan. He was brutally killed. No one could hide a natural death for two years,” said Sayyaf.

The news of the Taliban leader’s death came only two days before the second round of peace talks were scheduled to take place in Pakistan. On the Wednesday afternoon – 10 days ago – the news broke that the elusive one-eyed leader had died in April 2013 in a Karachi hospital. By Wednesday evening the Taliban confirmed the reports. The following day they asked for peace talks to be postponed.

Meanwhile, the outspoken former Jihadi leader went on to say that the Taliban had been established initially as a movement to suppress the Mujahideen in the mid-1990s and to destabilize Afghanistan.

“The selection of Mullah Omar [in 1994] was against Sharia [law] and Islam, and they [Taliban] were created to destroy Afghanistan which was a conspiracy against the people of Afghanistan,” Sayyaf told reporters.

“Those who are in the service of foreigners and working [against the interests of the country] for others their fate will be the same as Mullah Omar’s,” Sayyaf said.

On the issue of Mullar Omar’s replacement, Sayyaf had the following to say about the religious leaders who participated in the ceremony of allegiance to the new leader of the Taliban, Mullah Akhtar Mansour: “Those religious scholars who participated in the ceremony were not given the right to choose, if the religious scholars had been given the right to choose, they might have chosen the most educated and the most knowledgeable [person], rather than the most ignorant and mute one,” Sayyaf said.

He went on to say that the Taliban receives orders from outside Afghanistan – from foreigners.

“It is clear as daylight that the orders were coming from outside [the country], from foreigners,” Sayyaf said.

On the issue of the Taliban’s leadership, Sayyaf said 15 years ago he asked the Taliban – in a book he published: “What did you do against your nation, against yourselves and against your country? But soon you will get to realize what a big crime you have committed,” Sayyaf said.

Sayyaf however called on the Taliban to stop their war against Afghanistan and to change their direction, which, according to him, was the wrong path.

“It is not too late. You can turn away from the crooked path – which was crooked from the beginning. Come and sit with your nation and talk together and solve the issues and if you want, establish a political opposition party where you can criticize the government. If they [Taliban] were behind the nation, they would also get votes,” Sayyaf said.

Sayyaf did however criticize the group for holding sympathy ceremonies on behalf of Mullah Omar.

On a more positive note however, Sayyaf praised the Afghan security forces for the sacrifices they have made in their bid to bring stability to the country.

“I pray for our security forces and praise them that they boldly stand against conspiracies with all their shortcomings and defend their country and their people,” Sayyaf told reporters.

But he went on to lodge criticism against the National Unity Government (NUG) and asked them to end their disputes and start bringing reforms.

“For god sake enough is enough, till when will they be busy dividing up seats. Go after reform, work on security and corruption, go and build a nation,” said Sayyaf.

On the issue of peace talks, Sayyaf said that there must be two conditions for the holding of such negotiations.

“I believe that there should be two conditions for peace talks. First we should talk with a delegation that must represent all groups involved in the war – not just one particular party. The current process is incomplete as Daesh is leading war in our villages. Secondly, peace talks should lead to the end of war in Afghanistan,” Sayyaf said.

“I have asked the president when is he going to prepare a delegation for peace talks – [and when he does] he should be careful that the delegation is made up of Afghans not foreigners and Taliban. We should lead peace talks by those who are totally Afghans,” Sayyaf added.

He went on to say that he has personally informed President Ashraf Ghani that numerous Afghan officials hold Pakistani identity cards.

Talking about Daesh, Sayyaf said that the insurgent group is un-Islamic and their personalities are not befitting to Islam.

On his recent meetings with former president Hamid Karzai he said that they had discussed matters of national interest but that neither are in favor of the collapse of the National Unity Government.

“Karzai was never after the collapse of the system. We never wanted government to collapse, but yes we are concerned about the government and the government should strengthen itself,” Sayyaf said.

In conclusion, Sayyaf urged the media to help in the fight to stamp out corruption.