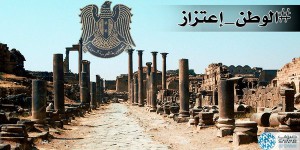 The Sawab Centre http://sawabcenter.org/, a joint UAE-US initiative to counter the extremism of Daesh terrorist organisation, has launched a new campaign entitled: “#OurNation_OurPride, on its Twitter account.

The three-day campaign aims to emphasise the role of real citizenship and pride in ones homeland in the fight against terrorism and extremist ideology, which aim to disrupt the march of development and prosperity of the various countries of the world.

The centre said that the campaign is part of its efforts in the fight against destructive ideas that work to destabilise the security of the homeland and the targeting of cultural and historical heritage of countries to deprive them of their gains.

The centre indicated that the new campaign also aims to raise awareness on the real objectives of Daesh organisation; which is to disrupt the march of nations, tear the social fabric and plunder its resources and wealth, stressing the need for unifying efforts to eradicate the terrorist ideology of Daesh, which has no religion or homeland as it does not pose a threat to a particular state or nation, but threatens all of humanity.

In the same context, H.H. Sheikh Abdullah bin Zayed Al Nahyan, Foreign Minister, said, “Daesh, and similar extremist groups which join it in spreading hatred, is attempting to disrupt the friendliness between the Islamic affiliation and love for the homeland, in a desperate attempt to portray loving the homeland as a crime which is incompatible, for example, with the Hadith, which confirm the much love and belonging of Prophet Muhammad, Peace be Upon Him, to Mecca, and the extent of his grief when he left it as one of the dearest countries to his heart.”

H.H. Sheikh Abdullah bin Zayed added that “For months, and with desperate attempts, the Daash terrorist organisation seeks to obliterate everything that has a relationship with the successive human civilisations which have emerged and settled in both Syria and Iraq, which represent the pride of mankind. By learning the ancient history of our Arab region, we find that for 14 centuries Muslims governed this region without prejudice to the monuments of previous civilisations and their humanitarian legacy, but Muslims historically, and even today, show a keen interest in preserving and protecting these monuments, an ideal which completely contradicts Daash’s demagogue practices and its false claims that religion eliminates civilisation.

The UAE’s Minister of Foreign Affairs said, “Today, the whole world is witnessing the brutality of this extremist organisation’s various practices, which are fighting humanity and which are even exceeding what the Tatars did on the fall of Baghdad: terrorists looting and destroying historical monuments in the cities of Mosul and Tadmer, destroying and the demolishing many cultural monuments for people who inhabited those areas, demolishing many churches and monasteries and historical monuments; and even Muslim sites were not safe from the evils of that barbaric organisation, as many mosques and Islamic archaeological sites have been destroyed, and its masterpieces were smuggled out of the region and sold to finance its terrorist operations.”

H.H. Sheikh Abdullah stressed the need for the international community’s continuation of its war on the Daash terrorist organisation, and work to reduce the smuggling of Iraqi and Syrian monuments by cooperation with UNESCO and all the governmental and non-governmental organisations concerned with the preservation of the global human heritage, because they are not the property of a specific state, but are the property of humanity as a whole.