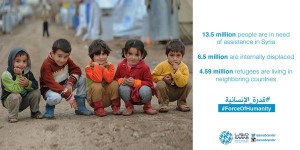 The Sawab Centre, https://twitter.com/sawabcenter,  a joint initiative from the UAE and US to fight ISIL’s extremist ideology online, started the campaign on Twitter and Instagram using the hashtag #ForceOfHumanity.

More than 3.2 million Iraqis and 6.5 million Syrians are internally displaced, while 4.59 million Syrians – among them 2.1 million children – are refugees in neighbouring countries, according to UN reports.

The campaign will focus on the conditions that those fleeing ISIL’s acts and conflicts in the region face, and will inform the public about healthcare services provided to vulnerable populations, including children’s vaccines, injury treatment, basic surgeries and hygiene maintenance.

The campaign coincided with a ministerial meeting of the Global Coalition to Counter Daesh (ISIL), and also seeks to promote the humanitarian efforts of the coalition as well as other international organisations in Iraq, Syria and neighbouring countries hosting refugees.