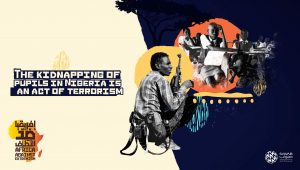 As part of its efforts to combat extremist ideologies via the internet and promote positive alternatives, the Sawab Centre is launching a new campaign under the hashtag #AfricaAgainstExtremism, like reported by wam.ae. The messaging campaign will run from 7th – 12th March, 2021, in Arabic, English and French on Sawab’s social media platforms Twitter, Facebook, Instagram, and YouTube.

The UAE and the United States established the Sawab Centre as a joint digital communications hub to combat extremist ideologies online and promote positive alternatives.

The #AfricaAgainstExtremism is the centre’s 53rd campaign. This campaign will shed light on extremism in Africa, specifically in Nigeria, and its societal consequences.

Sawab’s campaign follows stories of families and youngsters whose lives have been crushed by the violent extremist groups Daesh and Boko Haram.

The members of these terrorist groups persist in kidnapping and brainwashing school children, attacking mosques, markets, and public gatherings in an attempt to infiltrate and destabilize the region.

The campaign will feature the efforts of African filmmakers who raise their voices to bring attention to the plague of terrorism and tell the stories of those affected by it.

The more the centre understand violent extremists’ tactics, the more effectively it can protect the most vulnerable members of the society from the dangers of radicalisation.

Since its launch in July 2015, the Sawab Centre has encouraged governments, communities, and individual voices to engage proactively to counteract online extremism and promote positive alternate narratives to Daesh’s hateful ideology. Over this time, the centre has given voice to millions of people around the world who oppose extremist ideologies, while supporting efforts to expose terrorist groups’ brutality and criminal nature.

Sawab’s campaign #AfricaAgainstExtremism coincides with the increase in terrorist attacks in Africa, and reminds us that more than ever, the world needs unity in the face of violent extremism.