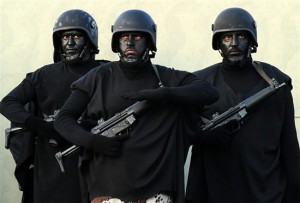 A Saudi-led coalition began air strikes on March 26 against the Iran-backed rebels, but says it has no plans for now to deploy ground forces.

However, Saudi army and naval special forces have carried out specific operations, said the adviser, without revealing if they had actually set foot on the ground.

Naval special forces provided “coordination and guidance” to enable the loyalist fighters to launch a counter-attack on the rebels.

Special forces “will continue their engagements” with the fighters loyal to Hadi, who has sought refuge in Saudi Arabia, said the adviser who did not want to be identified.

He said army and navy special forces were also involved in operations against Huthi units that “invaded” Myun Island in the Bab al-Mandab Strait, through which much of the world’s maritime trade passes.

On Friday, the coalition announced that air strikes had destroyed “military equipment and missiles” on the island, which could have posed a threat to shipping.

“Special forces have isolated the island as the operation continues to destroy all remnants of Huthi presence” which was supported by “foreign military” technicians, the Saudi adviser said.

Iran has dismissed as “utter lies” claims that it supplied weapons to Yemen, but a Western diplomat told AFP “there have been a lot of shipments”.

Shiite Iran, which backs the Huthis, has accused Sunni-ruled Saudi Arabia of sowing instability in the region.

Riyadh’s ambassador to the United States, Adel al-Jubeir, had on Thursday hinted at a special forces role, saying that “we don’t have troops, formal Saudi troops in Aden”.

The issue of ground troops is “on the table but the decisions will be made depending on the circumstances and the need”, he was quoted as saying by the Saudi-US Relations Information Service.

Coalition spokesman Brigadier General Ahmed Assiri, said on Saturday that there has been no announcement about “boots on the ground”.

“Even if it is true, I think the security and safety of the operation is most important for us,” rather than announcing it through the media, he told reporters.