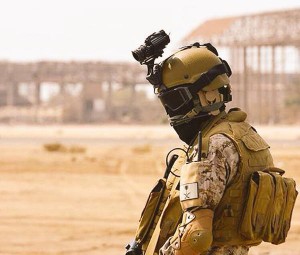 Saudi Special Forces are openly training near the southern Yemen city of Aden as the Gulf coalition ground troops push into Houthi strongholds in the north.

After six months of bombarding rebel positions, last week President Abd-Rabbu Mansour Hardi returned from exile in Saudi Arabia as parts of the country appear to be back under his government’s control.

A Saudi Special Forces commander stressed their mission in conjunction with UAE forces was to return the country to peace and to support Yemeni troops against the rebels.

But six months of bombardments from both sides have damaged, scorched and destroyed buildings, hospitals and homes.The Saudis have been delivering much needed aid including food stuffs and medical supplies.

But the coalition has also been blamed for the deaths of countless civilians. In the most recent incident at least 38 people – some sources say as many as 140 – are reported to have been killed in an air strike on a wedding party in south-western Yemen.

The UN says almost 4,900 people have been killed in the past six month, including 2,200 civilians