You are here: Home / Europe / Saudi-Russia alliance in the offing? 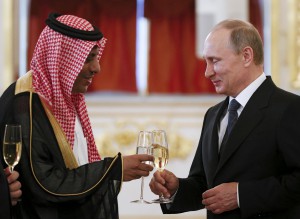 While it seems a bit easier to contend that Saudi Arabia is playing the ‘Russia card’ to keep the US under pressure, a closer look would suggest that Saudi Arabia and Russia, too, have a lot to gain from Riyadh making such a move.

However, it cannot be said that Saudi Arabia, forced by its own tactical mistakes in the Middle East, has been forced to change its course of action at global level.

Regardless of Saudi Arabia’s central involvement in crushing oil prices in 2014 partly to put unbearable pressure on Russian economy, Moscow has shown its partial willingness to reverse the trend.

With Saudi Arabia increasingly walking into its trap by not being able to force shale oil companies into bankruptcy, the best option left for them is, perhaps, to turn towards Russia and reverse the oil market’s current trend to achieve its objectives against shale oil producers.

In one of the previous articles on Saudi-Russia alliance, I had argued that countries that want to develop an “alliance” have to have mutual interests.

With oil prices continuously falling and hurting Saudi Arabia’s economy a lot and with Russian economy, too, depending heavily on stable oil prices, both countries seem to be developing the kind of “interest” necessary for converting their relationship into an alliance.

A few questions, however, remain unanswered. The most important of them is this: Although Saudi Arabia and Russia are on the verge of establishing an “alliance for oil”, will they still be able to reconcile their conflicting views with regard to Iran and Syria and forge a durable alliance?

A lot depends upon how Russia and Saudi Arabia transcend this conflict. While Moscow and Riyadh do share an interest in the form of a stable oil market, they certainly are not on the same page when it comes to Iran-nuke deal, Assad’s regime in Syria or Houthis in Yemen.

That Saudi Arabia and Russia are forging an “alliance for oil” was confirmed by Igor Sechin, CEO of Russia’s state-owned Rosneft, in an interview with Financial Times.

He was reported to have said that Saudi Arabia is seeking a formal market-share agreement with Russia, even going so far as offering Russia membership in OPEC, to stabilize global oil markets. Whether Russia would accept this offer is, however, yet to be seen.

Frustrated by failures, Saudi Arabia’s offers are, in fact, also an indication of Russia’s strong position. In the same interview, Sechin said the strategy of US and its allies for crushing oil market has backfired.

Although Russia has certainly been hit by low prices, the cost of production has also fallen, he added, to less than $3 a barrel due to the drop in value of the ruble, down from around $5 a barrel last year.

He also expressed confidence that Rosneft would be able to manage its debt pile. As of the end of June, Rosneft had $10.9bn of debt maturing this year and a further $15bn in 2016. The Russian ruble lost more than 50% of its dollar value by January 2015.

Oil prices similarly fell from $103 a barrel in September 2014 to less than $50 today. But Russian oil production costs are calculated in rubles, not dollars. So, as Sechin states, the dollar cost of Rosneft oil production has dropped dramatically from $5 a barrel before the sanctions to only $3 a barrel, a level similar to that of Arab OPEC producers like Saudi Arabia.

This being the case, there is no way the Saudis can price the Russians out. On the contrary, they both can certainly do a lot of damage to shale oil producers.

Such a situation, if it ever becomes a reality, certainly reflects Saudi Arabia’s failure in establishing its own hegemony in the global oil market, and the central reason(s) for Saudi Arabia’s renewed quest for bettering its relations with non-OPEC oil producers, especially Russia.

While Sechin, in his interview, chose such words to indicate possible Russian rejection of Saudi Arabia’s offers, an agreement, if ever signed, would certainly amount to a big boost to Russia’s own international standing.

Not only would this mean availability of markets for Russia out of the current US-EU war zones, Russia would also be able to acquire a better negotiating position via-a-via the US and EU regarding sanctions imposed upon it in the wake of the conflict in Ukraine.

In addition to it, such an agreement with Saudi Arabia also allows Moscow to maintain oil quotas to fix the current price-fiasco.

With the US shale oil producers out of the way, Russians would work with the Saudis to support the oil price by agreeing with the Saudis’ future output levels, while dividing the market with them at the same time.

On the other hand, with Russia as a member of OPEC, Arab Kingdoms would acquire the position to reap benefits from the Sino-Russia alliance and China’s ‘One Belt Silk Road’ projects.

With West Asian petro-economies coming together in China’s Silk Road, the political map of the world, dominated as it was by the US since the end of the Second World War, could transform to a great extent.

The unfolding economic boom coming out of Silk Road has already started to attract a several (oil and gas producing) states from Central Asia –Russia’s “under-belly.”

Russia and the Eurasian Economic Union states have recently agreed with China to integrate the rail route development of both. The development of huge new sea ports in Myanmar and other sites around Eurasia and the Indian Ocean will directly link the Gulf countries to Eurasia’s booming new economic market and beyond.

It was in May that China and Russia signed a joint declaration “on cooperation in coordinating development of EEU and the Silk Road Economic Belt.”

Moscow and Beijing declared a goal to coordinate the two projects to build a “common economic space” in Eurasia as a means to further expand their markets in “other parts” of the world.

The central link in this “grand alliance” is certainly China, which was, until recently, the biggest importer of Saudi Arabia’s oil.

Although Russia has taken over Saudi Arabia as the biggest importer of oil, the former continues to have vital economic interests in China; and it is China –and China alone — that can play a vital role in bridging the gap between Russia and Saudi Arabia and help them transform their relations into much more than an “alliance for oil”– a term that itself tends to place certain limits on their relationship.

With China importing oil from Russia and Saudi Arabia, it can certainly help them permanently settle the question of quota and distribution. Most probably, it is these very questions that continue to cast shadows over the formation of Russia-Saudi Arabia alliance.

The central issue is that if Russia were to become a member of OPEC, what would be its share in the production as well as distribution of oil in the world oil market? Unless this issue is effectively resolved, clouds of uncertainty would continue to prevail.