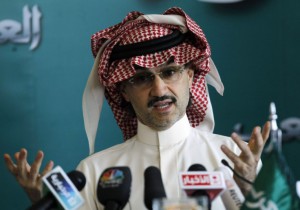 Saudi Prince and entrepreneur al-Waleed bin Talal posited that his country must reconsider its regional commitments and devise a new strategy to combat Iran’s increasing influence in Gulf States by forging a Defense pact with Tel Aviv to deter any possible Iranian moves in the light of unfolding developments in the Syria and Moscow’s military intervention.

“The whole Middle-East dispute is tantamount to matter of life and death for the Kingdom of Saudi Arabia from my vantage point, and I know that Iranians seek to unseat the Saudi regime by playing the Palestinian card, hence to foil their plots Saudi Arabia and Israel must bolster their relations and form a united front to stymie Tehran’s ambitious agenda,” Kuwaiti News Agency (KUNA) quoted Prince al-Waleed as saying on Tuesday , adding, Riyadh and Tel Aviv must achieve a modus vivendi , for Saudi policy in regard to Arab-Israeli crisis is no longer tenable.