You are here: Home / MidEastGulf / Saudi-led ground invasion of Yemen ‘within days’ 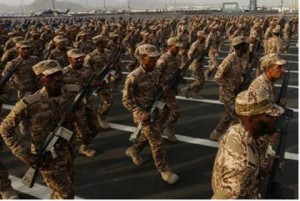 Troops from a nine-member Arab coalition led by Saudi Arabia could be marching into Yemen before the week is over. Meanwhile, an air campaign is eroding the Iran-backed Shi’ite Houthi defenses.

Saudi Arabia and Egypt have both mentioned the possibility of putting boots on the ground, according to CNN. On Saturday, Yemeni Foreign Minister Riyadh Yaseen said he expects coalition troops to be in Yemen “within days.”

Arab leaders are gathered at Egypt’s Sharm el-Sheikh for the Arab League summit and are reportedly drafting a resolution that will establish a joint Arab military force, and allow Yemen’s President Abd-Rabbu Mansour Hadi to request it to intervene on the ground in Yemen.

If the coalition does invade, the fight could be an intense one, and it may cross into Saudi Arabia.

Houthi rebels continue meanwhile their push southwards in Yemen, with fierce fighting breaking out in the key southern port city of Aden on Monday in a battle that sees Iran, via its proxy ,pitted against forces backed by Sunni states headed by Saudi Arabia.

Troops loyal to former Yemeni President Ali Abdullah Saleh were advancing on Aden on Monday to help the Houthis in their efforts to conquer the key port, reports Al Arabiya. Saleh’s forces have been aiding the Shi’ites in recent months as they toppled the government and began seizing power.

Saleh’s soldiers reached up to 30 kilometers (around 18 miles) from Aden, health officials told the paper, even as a Houthi brigade shelled civilian centers in the al-Dalea governorate, causing residents to flee their homes.